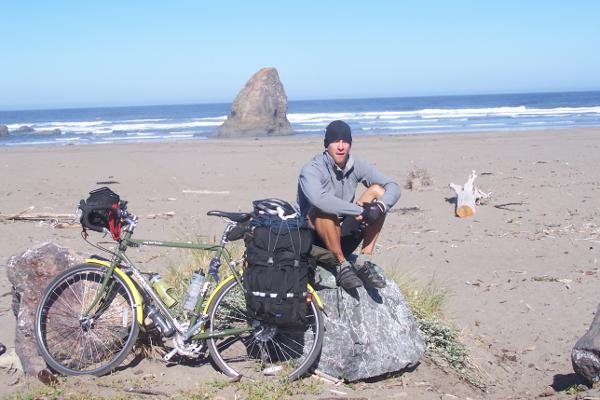 Josh Ronschke works at the Century Cycles store in Rocky River, and he purchased this Surly Long Haul Trucker in April of 2008. Here, in his own words, are the things he likes about the bike:

I have a little over 3000 miles on the bike. She doesn't have a special name but is, however, pretty special to me. My Long Haul Trucker is the first bicycle I bought new for myself. She has been out west along the coast and dabbled a bit in Colorado as well. It is really the perfect touring bike. The gearing is wide enough for any climbs I may encounter. The wheels are strong! I was never left wanting more out of the bike than it gave me. I am not a fan of flashy and this bike is definitely not that. I wanted something that would last the rest of my life and something I could afford. The Long Haul Trucker has lived up to that so far. I'm very happy with it and hope to do another trip soon!