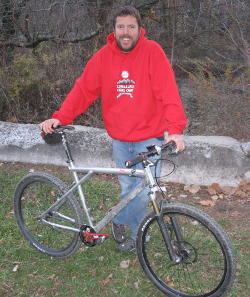 Doug Charnock, from the Century Cycles store in Peninsula, enjoys both road and mountain biking. He purchased a GT Avalanche mountain bike from our Medina store, just after he started working there in 1997. A couple of years ago, he converted it to a singlespeed.

Earlier this fall, just as Doug was getting ready to leave with his bike for the Singlespeed World Championships of mountain biking in New Zealand, he discovered a crack in the frame of his trusty old GT. As luck would have it, a customer and friend who works for another local business in Peninsula happened to have an old GT Avalanche frame collecting dust in his basement--the same model and same size as Doug's original--and donated it to help keep Doug in the race!

Doug and the rebuilt bike successfully made the trip to and from New Zealand, and both finished the race intact. You can read more about Doug's recent trip in "1800 Miles in New Zealand with 'Wonder Woman'", Doug's report on our blog.