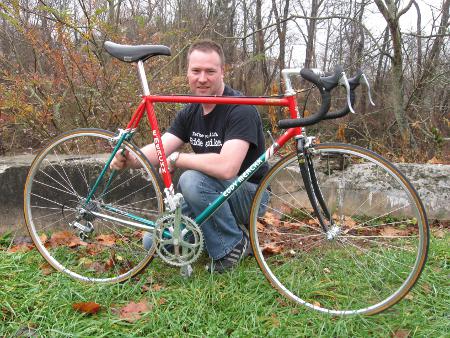 Derrick Kortvejesi (pronounced kort-WAY-see) is the Service Manager in our Peninsula store, and one of Century Cycles longest-tenured staff members. His knowledge of bike technology is unmatched, and he probably owns more bicycles than most people own pairs of socks.

One of his prized possessions is this circa-1990 Eddy Merckx Corsa road bike. The steel frame was hand-made in Belgium. It's the same model of bike used by the 7-Eleven pro cycling team up through 1990. Derrick bought the bike used some time in the mid-90's, and outfitted it with a Campagnolo component group, and used it as his regular road bike for a number of years.

Back in 2006, when Bob Roll (former member of the 7-Eleven team) visited Century Cycles, Derrick returned the bike to its original component spec: a full Shimano Dura-Ace group, and Vittoria Corsa tubular tires. With the exception of the carbon fiber fork, the bike now looks pretty much like the one Bob Roll was riding in 1990.

Derrick had Bob Roll autograph the bicycle at the store event (see photo below). "He flipped when he saw it," Derrick said of Bobke's reaction upon seeing a piece of his own history in person. 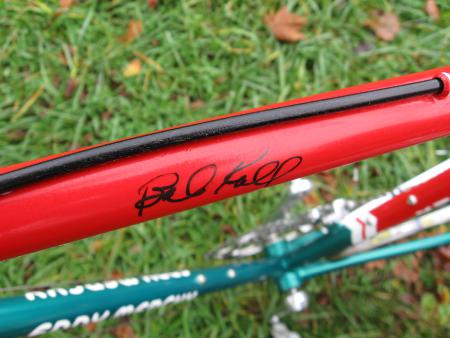