Bay Village, OH – In a ceremony on September 30, 2017, the Bay Alumni Foundation welcomed the four newest Distinguished Alumni inductees to the Bay Alumni Hall of Fame. One of those honored was Scott Cowan, Founder and Owner of the Century Cycles bicycle stores of Northeast Ohio.

The Bay Alumni Foundation recognizes Distinguished Alumni only every two years. To be considered for the award, the person must have graduated from Bay High School at least 25 years prior to the nomination; have been active and be distinguished in their chosen business, profession, or life work, and have received some previous recognition from contemporaries; be a person of such integrity and stature that the school district or Bay Alumni Foundation will take pride in his/her recognition; have participated in leadership roles within their community, and have demonstrated a concern for community relations; and have demonstrated, through word or deed, the importance of their education at the Bay Village public schools. Bay Village is a small community in the western suburbs of Cleveland, located on the shore of Lake Erie.

Scott Cowan is a 1978 graduate of Bay High School and graduated from Miami University (Ohio), majoring in Cartography/Geography. Century Cycles, which Scott started in 1992, has been consistently rated one of the top bicycling businesses in America since the mid 1990s.

In her introduction of Scott, Bay Village resident Tracey Bradnan cited the Century Cycles Bike To School Challenge, an award-winning program he started at Bay High School in 2008. The program, which has since expanded to seven middle schools and elementary schools in Bay Village, Rocky River, and Medina, encourages thousands of students to ride their bicycles to school to benefit their health, boost academic performance, save their parents money on gasoline, and help the environment. The Bike To School Challenge has inspired other schools and bike shops to implement similar programs all across America.

“I am honored and humbled to receive this award,” said Scott. “The work that Century Cycles does in our local communities would not be possible without our dedicated staff. I would like to thank them, and recognize the thousands of hours that they have volunteered over the years in supporting the Bike To School Challenge, as well as the various bike rides and charity events that we have been a part of, both as individuals and as a company. I share this honor with them; their work as ambassadors for bicycling in Northeast Ohio has made it possible for me to be recognized as an ambassador for Bay High School.”

Margaret “Peg” Liberatore graduated from Bay High School in 1983, and received her Masters of Education from Cleveland State University. She has received numerous awards as a teacher and guidance counselor, and has worked with various local mentoring and fundraising programs.

Al Nelson (BHS 1962) was a Bay Schools educator from 1970 to 2002, and is well-regarded for many years as a classmate, teacher, coach, active Alumni Foundation leader, community member, mentor, and friend.

The purpose of the Bay Alumni Foundation is to inform Bay High School alumni through the publication of their newsletter; to provide assistance for classes with their events, activities, and reunions; and to select, recognize, and honor distinguished Bay High alumni and educators.

Founded in 1992, Century Cycles is an award-winning chain of independent bicycle stores in Medina, Peninsula, and Rocky River, providing high-quality bicycles and friendly, expert service to northeast Ohio bicyclists and their families. Century Cycles is an authorized dealer of bicycles from Giant, Jamis, Electra, Surly, and Salsa; Haro and Premium BMX bicycles; as well as Santana tandems. The Peninsula store also rents bicycles (including snow bikes) year-round for use on the Towpath Trail in the Cuyahoga Valley National Park. 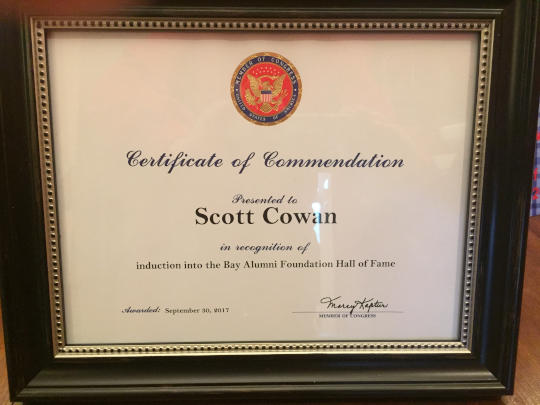 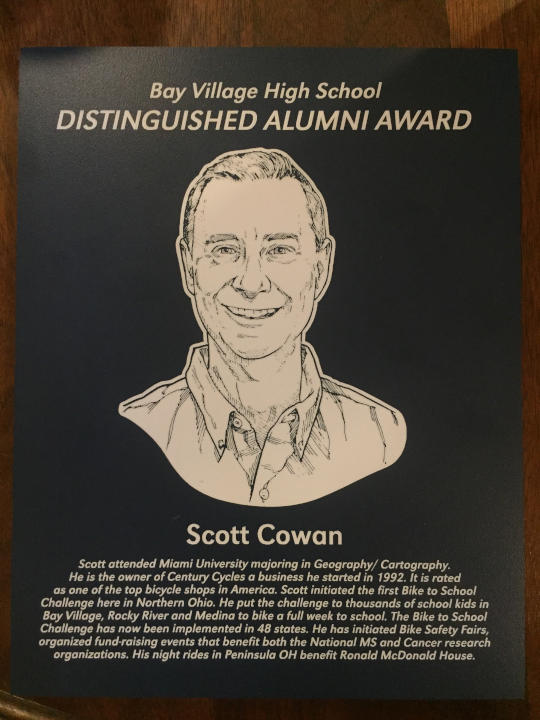 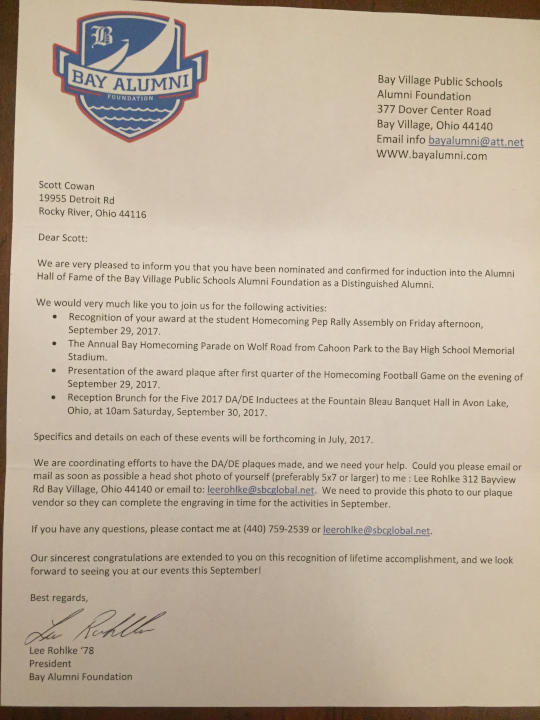