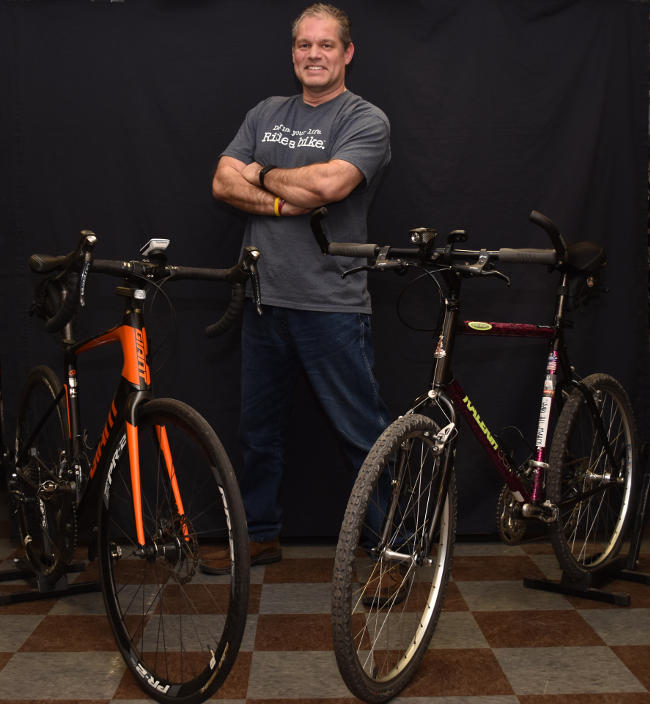 Question: What do aviation, architecture, and cycling have in common? Answer: Absolutely nothing. But, that’s where my story begins…

In high school, I had glorious visions of being a fighter pilot in the Air Force. I even joined Civil Air Patrol as a first step towards living out that dream. Unfortunately, less than perfect eyesight crushed that dream almost immediately, forcing me to consider a different path in life. Luckily, I had some serious artistic skills and loved to design things, so I decided to pursue the study of architecture. In 1991, I graduated from the University of Kentucky College of Architecture with a new dream of becoming the next Frank Lloyd Wright, Le Corbusier, or Thomas Mayne. After a dozen years in the profession, though, my path just didn’t seem to be heading towards that "Master Creator of Great Space" moniker I craved. Another career change seemed inevitable.

Then disaster struck.  During my second year at college, I was unceremoniously struck by a car and suffered extensive injuries to my right leg and knee.  Surgery to repair the damage took an entire day, followed by years of painstaking therapy.  During the recovery process, doctors told me that riding a bike was going to be the best way to keep my newly rebuilt knee mobile and strong. Not wanting to walk with a cane for the rest of my life, I took to bike riding like a man possessed.  After college, I bought my first "serious" bicycle, a 1992 Raleigh USA Technium Peak mountain bike, call-sign "Purple Reign." I started participating in several local bike tours and charity rides, slowly turning my recovery activity into a passion for cycling.

Fast forward to 2008.  The economy was in shambles and all I was riding now was an unemployment streak of 16 months.  Despite the misfortunes, I visited a bike shop in Medina called Century Cycles with the goal of upgrading to a legit road bike.  I walked out with a sweet new ride and a totally awesome purchasing experience.  The staff was patient, informative, and downright fun!  What a cool place to work, I thought.  So, in 2010, with the architectural field still struggling to rebound, I interviewed with Century Cycles and was brought on board as the newest member of the Medina team!  I quickly fell in love with my new career, and after a few short years, was promoted to Floor Captain.  In 2015, I broke away from the bike industry to pursue an excellent opportunity in the architectural world, but found I missed my Century Cycles family.  Then, in 2017, I learned that the manager position at Medina store was about to open up.  So, without hesitation, I applied for the job and was happily back in the fold that August!  Finally, in November of 2017, I assumed full store manager duties and couldn't be happier!

Outside the shop, I enjoy fitness biking around town on my 2015 Giant Defy Advanced 1, call-sign "Black Widow."  I’m a also a raging sci-fi geek who digs Star Wars and Star Trek equally, plays Xbox games well into the night, loves building Lego kits, is convinced I am the Batman, and listens to movie scores almost exclusively.  Surprisingly, with that kind of nerdy baggage, I actually do have a girlfriend...a Greek beauty named Maria who loves wine, adores kitty cats and, like me, is passionate about our Cleveland sports teams.  Most weekends you can catch us at a local pub or winery taking in a Cavaliers, Indians, or Browns game.

Back to Meet Our Medina Staff page...